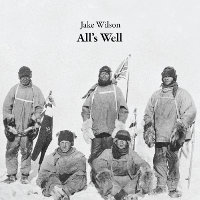 On Thursday 18th January 1912, a British team led by Captain Robert Falcon Scott arrived at the South Pole, travelling on foot and dragging their equipment and provisions behind them on a sledge. There they discovered that a Norwegian team headed by Roald Amundsen had reached the Pole one month earlier, using sledges pulled by teams of dogs.

None of the British team survived the gruelling 900-mile journey back from the Pole: Edgar Evans collapsed on February 17th; Lawrence Oates walked to his death on March 17th, to avoid slowing his companions down as his condition deteriorated; and Edward Wilson, Henry Bowers and Scott himself died in their tent at the end of March, after being trapped by a blizzard for several days without food and fuel, just 11 miles from their next depot.

A search party found this tent eight months later. Rather than disturbing the three bodies inside it, the tent was collapsed and a large snow cairn was built over it, topped with a cross and flanked by a pair of upright sledges. The bodies of Evans and Oates could not be found.

These songs were inspired by the journals, letters and biographies of all five men and attempt to capture their thoughts and feelings as they realise that their deaths are inevitable.

“Moving and beautifully composed … a CD to treasure” – Folk London.

“These are songs to be listened to and savoured, each morsel a piece of an evolving narrative jigsaw that grips the listener from beginning to end” – Irish Music Magazine

“Accomplished and imaginative … a very touching piece of work” – Maddy Prior, Steeleye Span

“Such an original idea, and the songs, arrangements and singing are sensitive, clear and intelligent” – Shirley Collins

“A most fitting and appropriate tribute to the bravery and fortitude of Captain Scott and the members of the Antarctic Expedition” – Admiral Sir Mark Stanhope, First Sea Lord