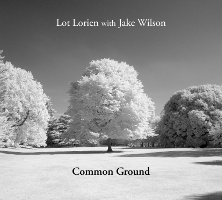 “Common Ground” grew out of chance encounters with both members of Lot Lorien in the Jephson Gardens in Leamington Spa. The CD cover and 16-page booklet feature striking black-and-white infra-red images of the Gardens, specially taken by local photographer, David Eaves, to reflect the significance of this extraordinary location to the project.