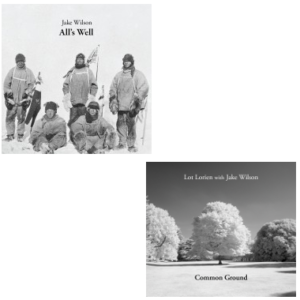 Jake’s extraordinary debut album, “All’s Well”, imagines the final thoughts of Antarctic explorer Captain Robert Falcon Scott and the members of his polar party, as they faced certain death on their return journey from the South Pole, early in 1912. “All’s Well” was praised by relatives and descendants of the polar team, endorsed by the Scott Polar Research Institute, and described as “a cultural masterpiece for the Scott centenary”.

The CD comes with a 12-page booklet including notes, lyrics and images of original documents.

The CD comes with a 16-page booklet that features David Eaves’ striking infra-red photographs taken in the Jephson Gardens, Leamington Spa, alongside the lyrics that inspired them.